The members of the New Forest Agricultural & Horticultural Association, formed nearly a hundred years ago, would be unlikely to recognise the New Forest Show of the twenty first century. The early shows cost two shillings and four pence to get in with competitions, one tent and livestock tethered up to a piece of rope between two oak trees.

The modern show is on for three days and it would take three days to see all the events and exhibits; it can be quite exhausting being a visitor, let alone for the people working and taking part. On Tuesday, armed with our tickets from Stewarts Garden Centre giving us entry to their hospitality tent, we enjoyed free light refreshments all day, ample toilets with no queues and seats by one of the main rings; albeit looking into the blazing sun. As we sipped our first cup of tea riders were showing off their working hunters. The beautiful horses were examined for their looks then observed for their elegance and obedience as they trotted, cantered and galloped round the ring. The male judges wore bowler hats and for the lady judges a hat wider than their hips was the dress code, they all had very big hats!

I wandered off at intervals to explore the show ground. Arts and crafts, holiday homes, furniture makers and funeral directors all had stands, alongside vintage farm machinery and ferret racing. In their quarters the ferrets had tiny hammocks to sleep in, more exclusive than the tent full of show rabbits.

I came across a dancing sheep display and learned a lot about sheep as well as having a good laugh; the finale was the shearing of a sheep, it’s not easy to be a stand up comedian and shear sheep at the same time.

Stewarts had a garden display, with beautiful wildflower beds; you could buy packets of seeds to make your own. There was a garden tent with exquisite flowers and a guess the weight of the cabbage. The Women’s Institute had a varied and delightful display to celebrate their centenary; the theme was a woman who has inspired you; each entry had to feature three different crafts, variety and imagination was in abundance. 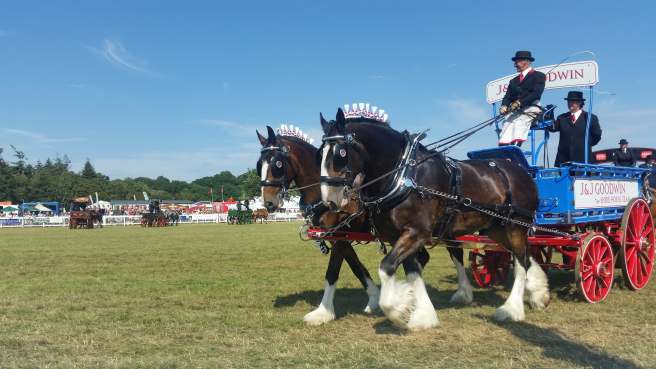 Back at the show ring the cows and sheep were having a winners’ parade, the highlight being a ram who managed to escape and run around making fools of the humans chasing him. Two beagle packs came on and children were invited into the ring to play with them, parents were reassured the beagles were longing to play with their darlings; we heard someone behind us laugh and comment … and rip them to pieces… but nothing untoward happened.

The highlights for me were the horses. The heavy horses’ musical ride is not seen anywhere else in the whole world, so we were told. Among the giants the Shires are my favourites with their feathered feet and elegant trot. But the best was yet to come, Atkinson Action Horses. If you watch any television dramas featuring horses, you will have seen some of their stars. We ladies love the scenes of our heroes galloping along cliff tops and across fields and these are real flesh and blood horses, not CGI; trained by experts, they enjoy working. The show display was action packed with gymnastics on Cossack saddles, bare back riding, jumping over fire and lying down and playing with their ‘best friends’. There was an hilarious commentary; riding and talking at the same time is very clever… and ladies, these chaps were fit, very fit. The girl riders were also amazingly agile, so I’m sure they had plenty of admirers.

Big and modern though it is, the show is still about animals, country life and competitions.